The Hijab as the Solution to Rape?

About a year ago, I realized something: We're told to wear the hijab in order to avoid being molested, and I, along with many other Muslim women, have actually fallen for this! We are also told that we are demanding respect by wearing the hijab. For some 21 years of my life, I was totally okay with this, believed it to be true, thought it made the most perfect sense in the world, and even accepted the head scarf as a commandment of God. Boy, was I wrong -- so, SO wrong.

Of course, I'm all for choice. As long as you choose to cover your hair (and anything else, for that matter, be it the face), it's all good. But I fear many Muslim women wear the hijab claiming it's out of choice but at the same time believing that it's *mandatory*. I'm not sure if that's a choice any longer, but I mustn't get into the whole philosophy of choice just yet. For now, I can say this much:

Why do I have to cover my hair to demand respect? Can I not demand it so in the millions of other ways available to me as options? Sure, if that's the only way you can get respect from others and it actually works for you, by all means hold strongly to it. But it doesn't work for everyone; even if it does work, it's not the only option. Only a man raised to believe that a woman whose hair isn't covered is inviting molestation or rape or troubles of other sort would assume that the woman has no respect for herself or her body just because her hair is not covered.

One way to view the hijab, especially for the reasons I stated above (respect, not inviting rape, etc.), is this: "People, the ONLY way men will respect me is if I wear the hijab, and so here I am." In other words, "I don't know how else to prove my worth to people, and the only way that I've been taught is by covering my hair."

So, yeah, many Muslim females falsely believe that by wearing the hijab, you're demanding respect and telling society, "You BETTER accept me for what I am. I'm not giving this up just to please you." What we don't think about is .. are we saying something else, something different, the opposite, when we choose not to wear the hijab? I mean, what about a non-hijabi woman screams, "People, feel free to disrespect me!" Why're we assuming that the non-hijabi Muslim woman has "given up" the hijab to please whomever?

Besides, here's something else we say when we wear the hijab: "I'm nothing but a dangerously sexy and naturally seductive being -- all because I was born a female -- and so the only way to make myself be seen as a NON-seductive individual is if I cover my hair/face."

No, no - don't get me wrong. That's not all there is to the hijab; I'm just reminding you that your way of seeing the hijab isn't the only way. And neither mine nor yours is the correct, or the only correct, way. But both are equal in value, and both views need to be acknowledged.

I find both ways insulting -- the view that the ONLY way men will leave me alone is if my hair is covered and the view that I'm a naturally seductive being. For God's sake, there's SO much more to a woman than just her body. And the niqab and hijab actually tend to objectify the woman at least as much as, if not more than, they "humanize" her by portraying her as a human rather than a sex object. Every Islamic/Muslim forum you ever go to talks about hijab; every debate on Muslim women revolves around women's hijab. Like, yo! Is there NOTHING more to my humanness, my womannness, my Muslimness, my identity than the piece of cloth I choose or am forced to wear on my head?

We're also told that wearing the hijab reduces our chance of being raped/molested/teased otherwise. But, but, but, but . . . but here's the problem with that: By covering ourselves so much, are we REALLY helping solve the problem of those hungry beasts who are looking for women to rape? Or are we submitting to their beliefs and wishes and placing on women ALONE the burdens of morality and peace and stability in our society, which we share with our male counterparts as well? Are there any other solutions to the problems of hungry beasts, or is this the only one? 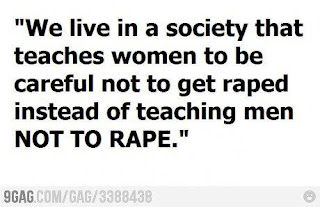 We may not realize it, but it's time we do: When we tell the woman to wear the hijab so she can avoid being molested, we're evading the REAL problem of our society: criminals, rapists justifying their evil actions against women who choose not to cover. Hungry men roaming around, looking for a female whose hair is uncovered (no, really?) so they can rape her. And what are we doing, folks? We're JUSTIFYING rape! We're saying, "That woman deserved to be raped. She should've covered her hair, and then nothing would've happened. Let's make all girls cover their hair. Problem of rape solved!" Oh, I don't think so. I've read some conflicting statistics on the rates of rape in Muslim societies where women have to cover their hair as well as in non-Muslim societies where women don't have to cover their hair, so I really don't know which stats to trust. But for those of us, like Zakir Naik, who think that AMERICA represents the ultimate non-Muslim society in which women don't have to cover their hair, that America's high rape rate represents EVERY non-Muslim society's rates, I'm not convinced! America isn't all there is, you see. There's Canada, too, and Iceland and Germany and Japan and Mexico and Brazil . . . and the list is never-ending.

My intention is not to make women take the hijab off. No. What they do with their lives, whether by choice or compulsion, is entirely their business -- or maybe the business of those who are in charge of them. But I want only that we see how many different ways our dress code can be seen, and I don't want us to accept any unless and until we've understood more than what we are used to. That way, our ultimate decision was made upon serious contemplation and not just imitation of someone else's beliefs or understanding/interpretation.

But do understand that if your wearing the hijab has anything to do with your sex/gender/physiology, you are essentially sexualizing yourself and bring more attention to your sexual parts than repelling attention from them.
Posted by Zufash at 7:40 PM

Email ThisBlogThis!Share to TwitterShare to FacebookShare to Pinterest
Labels: choice and the hijab, Misunderstood role of the hijab, the hijab as the solution to rape